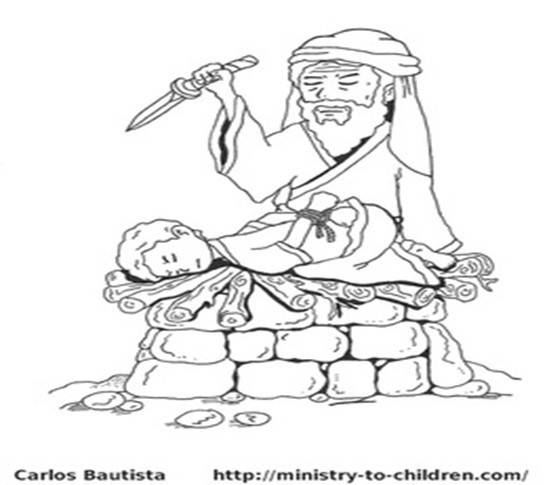 Abraham is Called to Sacrifice Isaac

We have learned that God is the great promise keeper. He promised a land to Abraham and brought him into it. He promised a son to Abraham in his old age and at 100 years Abraham was given a son - little Isaac.
That little boy, Isaac, must have been the delight of his father and mother. He was so special, so loved and such a blessing that they would never want anything bad to happen to him. He was probably spoiled and cared for like an egg.

You should also remember that Abraham was an altar builder. He built tables of stone on which to offer a sheep as a sacrifice to God. For that good practice of worshipping God with a sacrifice on an altar God blessed Abraham.

Then to his great surprise, God asked Abraham to take his only son, Isaac, whom he loved so much and kill him to offer as a sacrifice on an altar. This was a great test to Abraham's obedience.

It seemed so strange because God had made a promise that through Isaac’s children would come forth as many people as stars in the sky, but if Isaac was slain as a sacrifice the promise of many sons and daughters may never be fulfilled.
In reality God was testing Abraham. He was seeking to know if Abraham truly loved God with all his heart and would put God first.

The story is that God told Abraham to take his son into the land of Moriah, a very lonely place, and there offer up Isaac as a sacrifice on an altar. Abraham obeyed immediately. He did not even ask, Why?

Abraham rose up early in the morning, put a saddle on his donkey, and called two young men to assist him. He gathered wood for a fire and cut the wood into pieces to be carried by the donkey. After three days Abraham saw the place where God wanted him to build the altar and offer up Isaac.

He told the two young men to wait behind with the donkey. Then he said something very strange to those young men. He said, "I and the lad will go yonder and worship, and come again to you." Was this a trick or a lie? How could they both return if Isaac was killed for a sacrifice?

Then Abraham took the wood from off the donkey’s back and placed it on Isaac’s back to carry up the mountain. Abraham took fire in his hand, which would have been a light stick burning with fire. He also took a knife by which to kill Isaac. After all, sacrifices must die to be offered up to God. The blood of the sacrifice had to pour out on the altar.

Then Isaac had a question. He wanted to know how they would find a lamb for the offering. That was a tough question. Poor Isaac did not realize that he was to be killed and his body was to be offered up to God on that altar. Isaac was to die a terrible death.

But Abraham did know for He said, “God will provide himself a lamb”. Abraham truly believed that God would do a miracle that day and Isaac would be alive again.
Then the moment of trial came when they reached the top of the mountain. Abraham saw the very place where God wanted him to build the altar. He built the stones together to form a tabletop. He laid the wood on top of it and then he tied Isaac with ropes. He wound the ropes around Issac’s body so that he could not move. Then he lifted Isaac up unto the top of the wood on the altar. It seems that Isaac never complained or never resisted. Isaac was a willing volunteer. He obeyed his Father completely.

Then Abraham took the sharp knife by which to kill his son Isaac. Abraham stretched out his hand to plunge that knife into Isaac’s body. Even though it seemed to be a terrible thing to do, it was what God commanded. Abraham was being tested to the fullest extent that any father could be tested.

He went through with God’s command lifting up the knife and when he was about to strike with that knife, the angel of the Lord called unto him out of heaven, and said, “Abraham, Abraham: and he said, Here am I. And he said, Lay not thine hand upon the lad, neither do thou any thing unto him: for now I know that thou fearest God, seeing thou hast not withheld thy son, thine only son from me.”

Just then, Abraham looked behind him to see a sheep caught in the bushes. There so close by was a fully grown ram with it’s horns caught in the wood of the trees.
The Bible says that “Abraham went and took the ram, and offered it in the stead of his son.”
So, Isaac was free to live and all of God’s promises were wonderfully fulfilled. He would live to become a father of as many children as the stars in the sky.

This trial was a great test of Abraham’s faith, and Abraham showed that he believed in God’s wisdom and power. He showed that God’s commands are always good and that God will always honour His promises.

We learn from Abraham’s example to trust God and put Him first in the sure hope that God will work things out for our good when we obey His commands.

But there is a gospel lesson in this story. Abraham is like our heavenly Father and Isaac is like God’s son, God’s only son, whom He loves so much. God gave His Son to die as a sacrifice on the cross of Calvary. You know the text, John 3:16, “God so loved the world that he gave His only begotten son…” That happened on the hill called Calvary, which is the very same mountain called Moriah. On that same spot 2000 years later God offered up His Son to die on the cross.

Jesus died as a lamb, a sheep, in our place. Just as God showed Abraham a ram which he killed in the place of Isaac, God gave His only Son to be a sacrifice in our place so we need not die. Jesus died in our place. Jesus was our substitute. He suffered the death that we should have suffered due to our sins. Every one of us ought to die because of our sins. We deserve to die, but Jesus, who was God’s perfect Son, His only Son, whom He loved so much, did not need to die for his own sins. Christ died on the cross in our place for our sins.

Can you see how the gospel-good-news story of Christ’s death on the cross is written in the book of Genesis? This story is a picture of God’s plan to send His Son to be our Saviour. Such is God’s love for sinners that He planned the death of His Son and made Him to suffer and die in our place. The Lord Jesus is our sacrifice. Calvary is our altar. Jesus’ blood is our payment to save us from sin and give us an inheritance with God in heaven.

Abraham is the hero of this story in the book of Genesis because he was willing to slay His Son as God commanded. But the real wonder of this story is God’s amazing love for our souls. God was not only willing to slay His Son. He went through with it to slay His only beloved Son on the cross of Calvary. God planned that Jesus should die in our place, so we would not perish, but have eternal life, all because God loves sinners so much. Can you believe that? If you do then call on the Lord to be your Saviour. Confess your sins to God and thank Him for giving His Son to die in your place.

To listen the audio of this message click here.