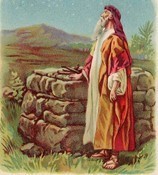 After God sent confusion of languages to the people at the tower of Babel, people groups scattered to different places in the world. One group of people built the city of Ur in the land of Chaldea. It was a very impressive city with many laws and powerful leaders, but the people wanted to live without God. They worshipped idols made of wood, stone and iron, even though they could not hear or speak, which is so silly.

In the city of Ur lived a man called Terah. He had three sons, Abraham, Nahor and Haran. Sadly, Abraham’s brother, Nahor died while quite young, leaving Lot, Nahor’s son, with no dad.

Then God spoke to Abraham to get out of the city of Chaldea and start a new nation of people who would love and serve God. He was to go to the new land that God would show unto him.
Abraham was to be the father of a nation known as the people of God. As God's people, they would not worship idols. They would not follow man-made rules, but they were to live by God's rules. Then they could worship the true and living God as His special covenant people.

When Abraham left the city of Ur, his father, Terah, his wife, Sarah, and his nephew, Lot, went with him. But for a time, they stopped at a place called Haran, not that far away. For many years they lived there until Terah died. It seems that only when his father was dead that Abraham was free to fully obey God's call to enter into the land that God had promised to give him.
At that time, Abraham was 75 years old and he took Sarah and Lot to travel into the promised land. Abraham went out in faith trusting in God because God had promised to protect him from the many enemies who lived in Canaan. This was necessary for the Canaanites were very tough and very cruel people, and worst of all they didn't know God. They were God's enemies.
As Abraham travelled down into the land of promise he saw the Canaanites, but he didn't make friends with them. He obeyed God and trusted in God's promise to keep him safe.

When Abraham set up his tent near the city of Bethel He was also careful to build an altar to worship God. He did not forget God, nor the special way he was to pray to God by offering sacrifices on an altar. In fact, everywhere Abraham moved he built an altar unto the LORD to worship Him. So, he became known as the altar builder. An altar was made of stones set up to form a table-top. Wood was put on top of the altar and fire was lit to burn the sacrifice. A sheep was killed and its body was burned in the fire. It was a sin offering to turn away God’s wrath. God commanded His people to worship him in this special way. Abraham showed his love for God by doing exactly as God commanded him. And God was pleased to bless Abraham for His obedient worship.

Today, God still blesses those who worship Him according to the special sacrifice of His Son. God offered up His Son as a sacrifice to die once on the cross of Calvary to pay for our sins. This means there is one special way to worship God. Every time we come to God we must offer our prayers and praises in the name of the Lord Jesus. God always blesses His people through Jesus' name and through Jesus' sacrifice on the cross.
Learn that well for it is the only way God will be pleased with your praying and your praises. Worship that denies or neglects the name of the Lord Jesus is hateful to God. It would be like throwing toilet water in God's face! It would offend Him. God is so holy and so jealous of His honour that He will curse the wicked to destroy them because they will not trust in the name of His Son.

Abraham proved the value of God's promises in many times of danger. One time, Abraham and his wife Sarah got into trouble with the king of Egypt. Due to a famine in the promised land Abraham went down to Egypt. Abraham told a lie to the king of Egypt saying that Sarah was his sister, which was only partly true, but not the whole truth. When the King of Egypt found out that Sarah was Abraham's wife he was really upset with Abraham and may have killed him. But God protected Abraham. By putting His fear into the King of Egypt's heart God kept Abraham and his wife safe from harm. God cared for Abraham so much that He would not allow anything to harm him, his wife or his servants. Abraham enjoyed God's protection because he prayed earnestly for God to fulfil His promises.

God's promises are wonderful. You should depend upon God's promises as you start a new year, and then things will go well for you. When God promises to keep us safe it means that He will use His supernatural power to watch over us. God can see our problems in advance, and He knows the things that are dangerous for us. In great wisdom and in mighty power He will direct all things for our good. Without us even knowing God or seeing Him at work He directs things to keep us safe and keep us in the centre of His will so that we continue to serve Him with His blessing.
Just as He did for Abraham, God can turn peoples’ hearts away from harming us. God can put a special circle, or hedge, around us to keep enemies and dangers away by day and by night. The Bible says that God never sleeps, so even while we are asleep He watches over us.

We learn from God’s goodness to Abraham even after he told that lie to the king of Egypt, how God remains true to His promises. God is not harsh with His own people. God is so good and so forgiving that we should always want to honour Him.
That's called living in the fear of God. Not that God desires to harm us, but we fear to offend Him, by sinning against his clear commands. We live in the fear of God when we obey His command to worship Him through the Name of the Lord Jesus. God wants us to believe on His Son and pray through the name of the Lord Jesus. Then we will enjoy living close to God.

Never go to bed at night without asking God to forgive your sins. Every night plead the cleansing power of Jesus' blood to pardon you so that you will continue to know God's blessing. Then He will be your God and keep watch over you even as you sleep. Make that your New Year’s resolution. Say this, I will never go to bed at night until I pray for cleansing in Jesus’ blood. When you do that you will lie down to sleep knowing your sins are forgiven, and God will bless you until the morning light.