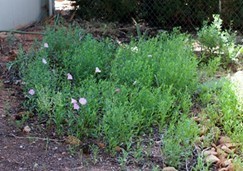 ImageA Perfect world to show forth God’s glory.
Did you see the picture of God's perfect world in last week's handout? It showed a beautiful world where the lion lay down with the lamb. That is the Bible's picture of complete harmony. In God's perfect world at creation a little sheep was not afraid of a roaring lion, because they were friends.
While the world was perfect it did have a problem. Satan was prowling around to tempt Adam and Eve to sin against God. The devil wanted Adam to break the agreement, or covenant, that God would bless Adam if he did not eat of the forbidden fruit on one special tree in the garden.

In that picture did you see those red apples hanging on the tree? They looked so good to the eye.
God made an agreement with Adam that he could eat of any tree in the garden except for one - the tree of the knowledge of good and evil. If Adam obeyed God in this arrangement then Adam would live, but if he ate of the forbidden tree he would die, so would Eve, though she was not yet created, and so would all their future children.

This agreement or covenant of works was made with Adam as the representative head of the human race. Adam was to take this test on behalf of all people who would ever live in the world.
Just as a king represents all his people who live in his kingdom, Adam was head of all people in this world. If the king wins a battle everyone wins, but if the king loses the battle then all his people lose.
Or, just as a Father who works to build a nice house and pays for it then his wife and children enjoy living in the house. But if he goes bankrupt his wife and children are on the street with nowhere to live. The good or evil of the father affects the whole family.
In this agreement about not eating the forbidden fruit, Adam was being tested. It was a test that affect every one of his family - the whole human race.

Satan, who was very smart, knew that if he could get Adam to disobey God and take the forbidden fruit of that one tree then every person in the would be brought into a state of death. So in a crafty, sneaky way the devil found a way to tempt Adam to cause him to disobey God by eating of the fruit.

Satan fashioned himself as a beautiful shiny serpent and talked with Eve when she was all alone, when she was away from her husband, Adam. He talked to her very sweetly. In a smart, but evil way. Satan asked Eve, Did God really say that you can't eat of one special tree? Surely not! Then he told Eve a lie. He said, "Ye shall not surely die; For God doth know that in the day ye eat thereof, then your eyes shall be opened, and ye shall be as gods, knowing good and evil."
The devil made Eve to think that to eat of the forbidden tree would only make her and Adam wiser, more like God, and keener to know what is good and what is bad.

Eve believed the devil's lie. She looked at the forbidden fruit and loved it so much that her mouth watered to have the fruit. So she took it, ate it, and gave it to Adam also to eat and he did eat the forbidden fruit.
Well, that was a disaster. Immediately, they felt the power of sin at work in their bodies. They were disgusted with themselves for they needed to clothe their naked bodies due to an awful sense of shame that troubled their hearts.

More than that, they were filled with fear to meet God for that former wonderful love of God that filled their souls just after creation was gone and they knew that God was angry with them.
Because of that terrible haunting fear of God, Adam tried to hide from God among the trees. But God could still see him and cried out to Adam, "Where art thou?"
But the harm was done. The agreement between God and Adam was broken. Adam had eaten of the forbidden tree. He broke God's covenant to him and instead of a promise of life, Adam was then immediately under a sentence of death.
He was under God's curse - a sentence of death. He became a sinner. He was a rebel to God, whose heart and whole inner nature was against God. Adam was an enemy of God and not his friend. Sin has corrupted him from head to toe.

Some people don't believe that sin has corrupted man totally. Let's take a bottle of totally pure water. It is drinking water. Now let's put a drop of black ink in the bottle of water. What happens? Is just one drop of the water polluted? No, the black ink mixes with every drop of water in the bottle, so that every drop of water is polluted. You couldn't drink from it even with a straw.
When we think of sin's poison corrupting Adam's total nature we call that total depravity.
It is not pure evil, it is a mixture of good and evil.
⦁ The clean bottle is like Adam before he sinned and fell from purity.
⦁ The bottle with a drop of ink is like sinners now in this world - all the sons of Adam. Sinners are not pure evil, but are corrupt in every possible way. Their mind, their heart, their desires, their emotions and everything that a sinner does is polluted to some degree with sin.
⦁ The black ink is like the devil. The devil has no good in him at all. He is pure evil. He can do no good. He can not even begin to love nor to obey God. He is like this black thick ink. And all souls in hell are also like the thick black ink. They are totally corrupt. They cannot repent to flee from sin. Nor can they believe the gospel or ever turn to God for mercy. They are filled with blasphemy, just like the devil himself.
Souls in hell are damned, doomed and total devils. Sin has made them so wicked and so hopeless that they will be in hell forever and ever. They will continue on as monsters of wickedness.
So it is vital that all sinners in this life, and you too, flee from the judgment of hell and be cured from their pollution of sin by the sin-cleansing power of the blood of Jesus.

To be our Saviour the Lord Jesus had to die on the cruel cross at Calvary. He had to suffer the terrible wrath of God for us. He suffered as a sacrifice for sin so he would wash away the black sins which we committed for us to be restored to total purity. The blood of Jesus purifies us totally for the Bible says, "…the blood of Jesus Christ, his Son cleanseth us from all sin (1 John1:7).
The Lord did this for sinners, but not for the devil. The devil can never be saved, nor can souls who are already in hell. There is no cleansing from their sins. They are doomed to hell forever and ever.
Jesus came into the world to give us eternal life. "For God so loved the world that he gave his only begotten Son, that whosoever believeth in him should not perish, but have everlasting life (John 3:16).

May 27
Praying in the Spirit 2