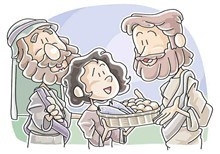 It was difficult for people to grasp that the Lord Jesus was God’s Son, and that he came down from heaven. No one else ever came from heaven to live on earth. You may ask, but was Jesus not also born into this world? Well, of course he was. He was born of Mary in a real place at a real-time in the stable at Bethlehem. But Jesus’ Father was God, who united Him in Mary’s womb to be made in the flesh. His Father was God, and Jesus was the second person of the Trinity joined to a human body.
For thirty years few realised who Jesus was. Then at the age of thirty, he began to preach and teach, claiming to be the Son of God and the Saviour of the world. People were very impressed with his teaching. The Lord Jesus taught by parables and told stories that people could understand. They liked Jesus’ messages about the kingdom of God. The Lord’s sermon on the mount was a wonderful series of lessons on who God is, how the law of God is true, how hypocrisy is disgusting, and how heaven and hell are real.  People gathered in great crowds to hear the Lord preach. Then the Lord started doing miracles. He healed people’s diseases and cured from all kinds of sicknesses. The Lord was able to heal everyone who came to him.
One of the greatest miracles that the Lord Jesus ever performed took place in a mountain where He sat with his disciples. They were eager to learn more from the Lord. Then a great crowd came out to that mountain. There were so many people that the Lord asked Philip, how shall we feed all these people? We will need to buy a lot of bread to feed them. Philip said it would cost 200 pennies to buy enough bread for them all. That would be about $4,000.00 in today’s funds, because a penny was a day’s wages. A workman earns around $200.00 per day, and 200 days at 200 pennies per day would be $4,000.00.
Then Andrew announced that there was a little boy in the crowd with a lunch. He had five barley loaves and two small fishes. He probably intended to make a few sandwiches for at any time of the day he felt hungry.
When the Lord Jesus heard of that little boy’s lunch. He asked for it to be given to him. So, the little boy gave up his lunch and placed it into the hands of the Lord, not knowing what the Lord would do with it. He must have wondered what he was going to do that day for food.
The Lord Jesus then commanded the people to sit down in rows in the long grass. Somebody counted that there were about five thousand men plus some women and children. That was a lot of people and a lot of mouths to feed.
Then the Lord took the loaves and the fishes and offered up a prayer to His Father in heaven, giving thanks for the food.  By the way, this is a good thing for us to do. We should always thank God for our food because it is His good provision to us. Many people in the world do not have enough food to eat and some go hungry. So, when you have food to eat be thankful to God and give Him your thanks each time you enjoy good food to eat.
The Lord then called on the disciples to give out the food to the people. The Lord broke off some bread from those five loaves and passed it to one disciple after another. Then he broke off some more until the disciples had bundles of bread to give to the people sitting in long rows. The miracle was repeated over and over so that the more bread the Lord gave out the boy’s lunch was still there. The Lord did the same thing with the two little fishes, so that everyone in that great crowd ate and ate until they could eat no more. After everyone was filled, the Lord commanded that the fragments, or leftovers be gathered up. The disciples took their baskets, and every scrap and crust of food was placed into them, and the 12 baskets were filled. From that, we know for sure that no one was left hungry that day. All were fully satisfied. They all saw the miracle; they all ate of the bread, and they all ate of the fish from the boy’s lunch so that they were all filled with food. No one went hungry. All were amazed at the miracle that was performed before their eyes.
Now think about the witness that this great miracle raised. Five thousand men who were fed from a boy’s lunch meant that five thousand families would soon be talking about the miracle the Lord Jesus performed feeding the five thousand with five loaves and two small fishes.
This was a miracle that made the name of Jesus famous in the land of Israel. It was time for Him to be known as God’s Son, the Saviour of the world. He would be known as a miracle worker and teacher.

The wonderful thing about the Lord’s miracles is the fact that they were matched by His own powerful ministry to hearts. What the Lord did to feed so many bodies He was also able to do to feed souls. Jesus went on to teach that He was the bread of life come down from heaven. He said, “I am the bread of life: he that cometh to me shall never hunger, and he that believeth on me shall never thirst” (John 6:35).

The Lord Jesus was indeed God’s Son sent down from heaven. His ministry was to save souls and give them life from heaven. When we believe on the Lord Jesus as the Saviour whom God the Father has sent into the world we are given the gift of eternal life.  As bread and fish are food for bodies, Jesus is the bread of God for our souls. Believers on Jesus can live in the power of His life.
Did you ever go home from school so hungry that you felt faint? You couldn’t think straight or do anything until you got some food. Then after some bread and butter perhaps, and a glass of milk, you felt stronger. So, in a similar way by believing on the Lord Jesus and trusting in Him as the Saviour of the world we are brought from powerlessness of soul to new life.
You must believe that He is God’s bread sent down from heaven to feed your soul. You must trust in Jesus’ power to save sinners. You must believe that He lived and died for you. You must believe that He will keep His promise, “He that cometh to me shall never hunger, and he that believeth on me shall never thirst” (John 6:35).
You must believe that if you go to the Lord Jesus for salvation and eternal life. He will not turn you away. Here is His promise to you, “All that the Father giveth me shall come to me; and him that cometh to me I will in no wise cast out” (John 6:37).
Remember that the miracle proves the power of the Lord’s promise to save your soul. The one who fed a multitude with a boy’s lunch with twelve baskets over has the power to save you from sin and give you eternal life. Remember that Jesus is the bread of life sent down from heaven.