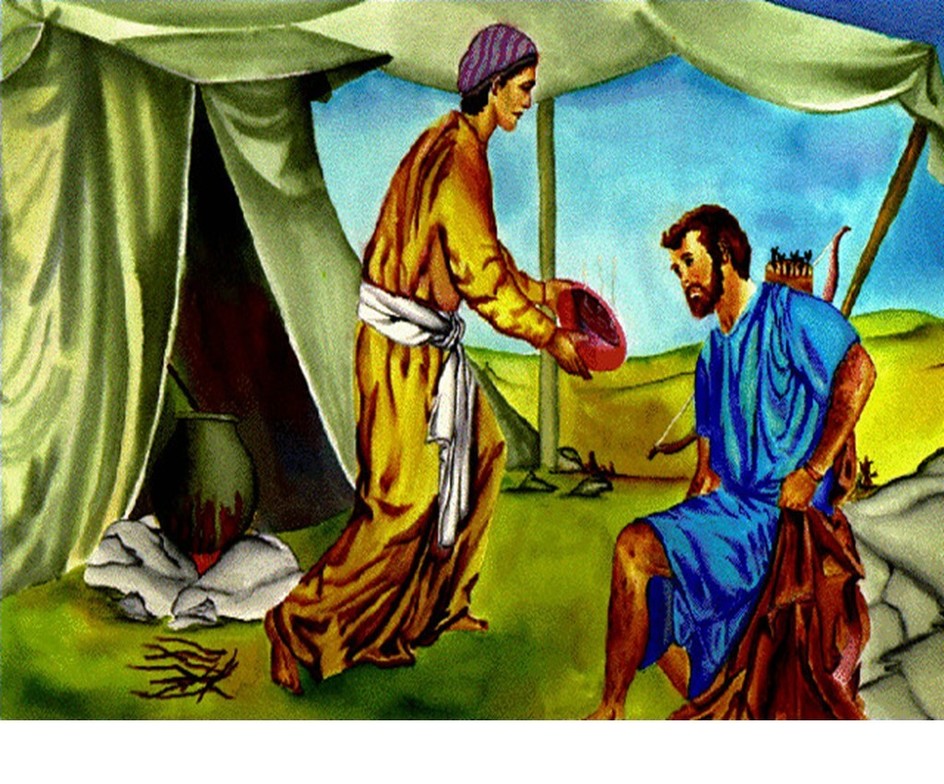 How Jacob Got the Birthright
Do you have a brother? Brothers often mean trouble. It is rare to have a good brother. It is common to have a bickering and fighting brother who can make life so hard for you and others in your family. Boys, do you ever fight? I know you do. I was once a boy and I had a brother, who was almost three years older than me, and I think I caused him a lot of trouble when we were young.

Today's story is about two brothers who were twins. Even before they were born, they were struggling with each other in their mother's womb. They were set for a life of fighting.
Esau was born first. Then Jacob was born immediately after Esau, for he was holding on to Esau's heel when he came into this world from his mother's womb. The Bible says that Esau and Jacob were twins, but Esau was red skinned with lots of hair on his body, while Jacob was smooth skinned.
Both boys grew up as children in the home of their father Isaac and their mother Rebekah. Esau became a hunter in the fields, but Jacob liked to stay close to home and help his mom. Esau was daddy's boy and Jacob was mommy's boy, which became a recipe for trouble. Moms and dads should never have pets in the family. But these parents did.

The Bible says that Isaac loved Esau because of his hunting and the venison stew that he made. Venison is meat from deer, and it takes a good hunter to bring home a wild deer for its meat. The Bible also says that Rebekah loved her son Jacob, because Jacob loved being at home helping with the cooking. So, you can see that while the two brothers were twins they were very different, and that's OK. It's Ok to follow your own interests in life, but its not OK to fight about them as Jacob and Esau did.

Because Esau was born first, he was called the first-born, which meant that Esau would get all of his father's riches. Isaac promised to give all the riches and promises of God to Esau. You see Isaac was very rich. He prospered in the land of the Philistines. Even in a time of famine God gave him at least one huge harvest of one hundred-fold, and probably many big harvests. God also blessed His flocks and his herds so that they multiplied. Isaac needed many servants to care for his crops and his animals.

But more than that, the covenant family-blessings that God gave to Abraham passed to Isaac, and Isaac wanted to pass them all to Esau. These family covenant-blessings were priceless and worth more than silver or gold could buy.
One day Esau was out in the fields hunting venison. He was out for a long time in the fresh air running and hunting so that when he returned home he was so hungry that he thought he would faint with hunger. Jacob had been cooking meat stew and its hot savoury smells filled the air. This made Esau’s mouth water so that he longed for a bowl of Jacob’s stew.

Right then Jacob found his opportunity to bargain with Esau about his birthright. He took advantage of Esau's hunger and blurted out, "Sell me your birthright." Jacob wanted the blessings that Abraham gave Isaac and which Isaac was soon to give Esau. Jacob wanted the future favour of God for himself so he could become the head of the specially chosen people of God.

That would be like you or me saying, I don't want to be a Christian. I don't care about the Bible or the promises of God. I don't want to be saved and go to heaven. You would be saying I'd rather enjoy this world now for a little short while and not live for Christ and Heaven. That would be terrible. You would lose your soul and lose everything the Lord has in store for you.
If you are growing up in a Christian home and have been taught the Bible and how to pray, and if you have been in church every week since a child in your mother’s arms, and should you then come to a point where you will not trust and serve the Lord, then you reject the truth of the gospel. If you say that Jesus either didn't die at all on the cross, or that his death and blood atonement has nothing to do with you, then you are like Esau, you are selling your soul.

The reality is that you want to follow the lusts of this world. You want the pleasures of sin. You want the things that ungodly people talk about and live for. You want to join your friends at school to do and say all that they do and say. So you are willing to give up the Saviour for a little slice of this world’s sin that is tempting you right now. You are despising the truth, and you are denying the way of salvation by faith in the Lord Jesus.

I need to warn you that if you do that you may never get God's blessing back again, for Esau despised his birthright and couldn't get it back. His soul was lost.
It would be better for you to never have known the gospel that is in the cross-work of the Lord Jesus at Calvary. It would be better if you had lived in a godless land. But to hear and know the gospel of grace, to read the Bible for yourself, and to watch God's people living for Jesus then turn away from it all is to damn your soul forever.

Don't do what Esau did, for he could not get the blessing back again. This is a great warning to any who would dare to turn away from the Saviour. Again, the book of Hebrews 12:17 says, "For ye know how that afterward, when he would have inherited the blessing, he was rejected: for he found no place of repentance, though he sought it carefully with tears."
So, don't sell your soul. Don't allow the seeming sweet tastes of this world cause you to give up your standing as a Christian, a believer in the Lord Jesus Christ.

The wonderful news that comes out of this story is that Jacob, though a sinner in many things, received the blessing. Even though he was unworthy. Even though he was a twister and a cheat he received the blessing. Next time we will learn how that happened.
What we do need to know is that God loved Jacob. And that is good news because no matter how bad we have been, no matter how sinful we are, God loves sinners and will save all who seek Him.

Today, Jacob is in heaven while Esau is in hell. Let that be a great warning to you. Do not despise the Saviour to turn away all the love of God that He gives to believers in His salvation. Rather bow your knees to thank the Lord for coming into the world to save sinners. Invite the Lord to come into your heart today and to give you the eternal blessings that are promised to you for believing in and accepting the Lord Jesus as your Saviour.

To listen to the Video or Audio of this message click here.