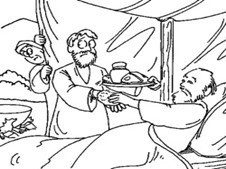 How Jacob Received The Blessing
Isaac was getting very old, and very blind. It was difficult for him to see things and recognize people. Being near to death, old Isaac wanted to see his son Esau inherit all the family covenant blessings, because he was the firstborn. But before he did that, Isaac asked Esau to go hunting for some venison, so that he could have some of its savoury meat. It was his favourite food, as he thought it was yummy!

So, Esau obeyed his father, Isaac. He took his bag of arrows and his archer's bow. He went out into the open fields to hunt for deer. He would go out slowly and quietly, lest he would scare them off. He would sit like a cat waiting to catch a mouse, and then upon seeing a deer he would put a straight arrow into his bow, pull back the bowstring with all his might and let the arrow fly to take down the deer.

Now while Isaac had been talking with Esau, his mother, Rebekah, had been listening to every word. She became jealous for she wanted Jacob, her favourite son, to have the family blessing. So, Rebekah began to plot and scheme to find a way for Jacob to go to his father before Esau returned from the fields, and before he received the blessing. She called Jacob and asked him to go into the herds and bring her two kids from among the goats from which she would make savoury meat to give to his father, Isaac. She would spice it up making it so full of flavour that Isaac wouldn’t know it was from goats. This was very clever, but it was very wrong.

Then Rebekah did something else that was very bad. She dressed Jacob in Esau's clothes so that he would smell like Esau and his clothes would feel like Esau. Then Jacob said, But Mom there’s a problem. Esau has hair over his body and my body is smooth, dad will know it's not me. Rebekah was not worried. She had an another idea that would help deceive old Isaac. She took the skins from off the goats and placed them on Jacob's hands and upon his neck, so Isaac would think it was Esau. This was another deceit and another lie.
So, when Jacob was dressed in Esau's clothes, and had the goat skins on his hands and his neck, his Mom, Rebekah, gave him the pot of the savoury stew she had made from the goats to give to his father, Isaac.
Jacob went in to his father and said, "My father: and he said, Here am I, who art thou, my son?"

Then Jacob told his father an outright lie. He said, "I am Esau thy firstborn, I have done according as thou badest me: arise, I pray thee, sit and eat of my venison, that thy soul may bless me."
Isaac was surprised that Esau had hunted the deer and cooked the stew so quickly, for it takes a long time to hunt in the open fields and wait for an opportunity to take down a deer, then carry it home, prepare it for the pot and cook it.
Jacob lied again. He said, "God brought it to me." Then Isaac said, come near, I want to feel your skin to know you are really my son Esau. Isaac said, "the voice is Jacob's voice, but the hands are the hands of Esau."

As soon as Isaac had eaten the goat stew, which he thought was venison, he called Jacob and asked for a kiss. When Jacob drew near and got close to him, Isaac smelled his clothes which were really Esau's clothes, and when he felt his hands, Isaac felt sure that it was Esau, but it wasn't, old Isaac had been deceived through lies and deceit.
Then Isaac proceeded to bestow on Jacob the blessing of God by which he would inherit the family covenant and become a ruler of many people. Nations would bow down to Jacob including his older brother. Isaac said, "Cursed be every one that curseth thee: and blessed be every one that blesseth thee."

So, Jacob received the blessing. And what do you know? As soon as the blessing was given to Jacob and he went out from his father in came Esau from his hunting and offered his father, Isaac, savoury meat made from real venison. Then the wicked plot was discovered, but it was too late. The blessing rested on Jacob, and it would not be taken from him. Esau was angry for he lost the blessing.

What do you think of Jacob and all the lies he told his father? Jacob had been very wicked to deceive his father. Jacob, by his very name, means schemer. He was a sinner.
So how did he come to get the blessing from God? That is a really a gospel question? The Bible says in the book of Romans that God loved Jacob, but hated Esau. We can easily understand why God would reject Esau, because he despised his birthright. He rebelled against God, but the really tough question is, How did God love Jacob, that lying, scheming sinner?

The answer is that we don't know of any reason, for there is absolutely no reason in Jacob why God should set His love upon him. Jacob was such a terrible liar and a wily deceiver. But this is the question we have to ask about everyone who is saved, because we are all sinners. We are all undeserving of God's love and God’s mercy, for who is there that has not sinned? Who has never told a lie, or thought up some scheme to promote themselves and put down others? Are you sinless? Have you never done evil?

This then is the wonder of the gospel, which we call God's good news to sinners. Jesus is not come to save the righteous - those who are good. He is come to save sinners - those who have done evil.
That is why God gave to His Son the name, “Jesus”, for He came into the world to save His people from their sins. He came to remove our sins and give us salvation as a gift of His love. To do that, the Lord Jesus needed to die on the cross, endure the wrath of God against our sins to bear them away from God’s sight. Jesus died in our place, as our substitute. His blood covers over our sins from God’s view, so that God cannot see our sins. They are totally gone.

Jacob received the blessing purely on the basis of God’s mercy and Christ’s death. He is now in heaven, not because he was good, or better than Esau, but because God set His love upon him and God chose Him to eternal salvation.God also changed Jacob from his wicked lies and schemes. God began a work in Jacob to change his sinful nature, so he would cease from lies and evil schemes.

It is never enough for a sinner to come to know about the love of God and profess faith in the Lord Jesus without an inner change of heart. The gospel is also the power of God to enable sinners to live a new life, a life of overcoming sin. So, the Lord Jesus saves liars and cheats; He saves thieves and robbers by dying in their place and by sending the Holy Spirit to live in them.

Everyone who is truly saved will get the victory over the habit of sin and will defeat the power of sin. Has that happened to you, or are you still a sinner going on and on telling lies, plotting to deceive others to make yourself look good on the outside? You need to be saved. Then you will know the love of God in your soul to enjoy a new peace, and to experience the power of God to live a new life.

To listen the audio or view the video of this message click here.