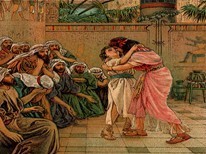 To listen to the audio of htis message click here.

May 27
Praying in the Spirit 2