Joseph is Sold Down to Egypt 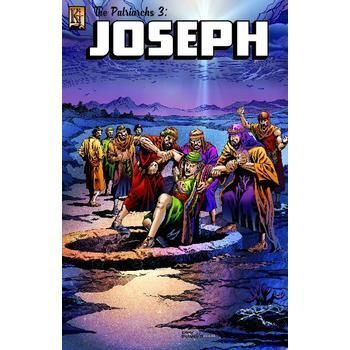 At a time when Joseph's brothers were caring for their father's flocks in Shechem, Jacob sent him to see how they were doing. He set out to find them in the big open hills of Shechem. On the way Joseph got lost. He was wandering in different directions seeking to find his brothers. Then a man noticed Joseph and asked him where he wanted to go. Joseph explained that he was on a mission to find his brothers in Shechem. The man pointed him in another direction saying that his brothers could be found feeding the sheep in a place called Dothan. So, at last he found them right there with the sheep.

As soon as the brothers saw their little brother Joseph coming toward them in his coat of many colours they said, "behold this dreamer cometh." Joseph's brothers hated him because of his dreams about the sheaves of corn bowing down to his sheaf and the sun and moon also bowing down to him, especially when they figured out their meaning. They were enraged at the idea of ever bowing down to little Joseph.

Immediately, upon seeing Joseph again they began to plot with each other to kill him. They boasted that they would slay Joseph and then tell a horrible lie to their father telling him the false story that an evil beast had devoured him. Then Reuben, the oldest brother, protested saying, do not shed his blood. Rather, let’s cast him into a deep pit in the wilderness. Reuben hoped that he could buy time to free Joseph and send him safely back to his father.

Soon Joseph caught up with the brothers at Shechem. Then they began their sorry scheme. They stripped Joseph from his beautiful regal looking coat. They cast him into a deep pit where he was all alone and had no hope of escape, for being out in the wilderness no-one would hear his cries for help from that pit.
But God did. God had a plan to save Joseph for God had a very special purpose for Joseph's life. He was not going to die there in the wilderness, Joseph was going to live a long life to see great blessing come to his family, even in the land of Egypt.

The first part of God's plan was to see him taken down to Egypt. So, in God's perfect timing a group of traders came along that route going down to Egypt. It was then that Judah had the idea of selling Joseph to these traders who were money hungry, for Joseph would be a valuable slave in Egypt. So, they sold Joseph to the Ishmaelites for 20 pieces of silver.

Reuben, who had not been part of selling Joseph to become a slave, found the pit empty and he cried out, where is Joseph? He was relieved to learn that he had not been killed, and that he was sold as a slave down to Egypt. But what were the brothers to tell their father, Jacob? How would he take the news that his beloved son, Joseph, was sold to be a slave? He didn’t wouldn’t the news very well.

The brothers, therefore, conspired to cover up their sin of selling Joseph down to Egypt. They dipped Joseph's lovely coat of many colours in the blood of a kid which they had killed. When they presented the blood stained coat to their father they told him the lie, that Joseph had been mauled by a wild beast. Jacob examined the coat and sure enough it was Joseph's, for there was none like it, and being stained in blood, Jacob believed the lie that Joseph had been attacked by a wild animal and was dead. Jacob mourned with great sadness for many days for the loss of his favourite son, Joseph. No one was able to comfort Jacob’s broken heart. Hot tears of sorrow rolled down his cheeks every day for the loss of Joseph, whom he loved so very much. His heart must have felt very empty and life not worth living.

This was a very wicked thing the brothers had done. They were guilty of murder in their hearts, and they were guilty of cruelty to Joseph who was headed for terrible hardship as a slave to an unknown master. They were also guilty of lying every day, for they lived the lie that Joseph was dead. They were prepared to keep their father in the agony of sorrow all his life, while they had to live and sleep with the horror of what they had done. It must have been torture for them to live a life of such cruel deceit, not to mention their trouble of mind wondering if they would ever be found out.

Sin is like that. Sin is easy to commit but hard to cover up. God has so ordered the world that it is easier to love the truth and to live the truth than to love and live a lie.
A lie is like living with a secret monster pursuing you day and night. There is no rest of mind or heart when a lie is haunting you. No matter how much effort you make to cover up your sins the more you dwell upon them the more they trouble you until you just can’t live with yourself any more.
The wisest man who ever lived was King Solomon. He said, “He that covereth his sins shall not prosper: but whoso confesseth and forsaketh them shall have mercy” (Pro 28:13)
These wicked brothers did not do well. Some years later there was a long famine in the land. There were years of no rain so that crops did not grow and people were getting hungry. The brothers were facing starvation. It was then that Jacob their father sent them down to Egypt to buy corn, to keep them alive. They faced many years of hardship. God was punishing them for their evil.
The Bible says, “…the wicked are like the troubled sea, when it cannot rest, whose waters cast up mire and dirt.  “There is no peace, saith my God, to the wicked” (Isaiah 57:21).

Did you know that your sins will torment you until you confess them and seek God’s forgiveness? Without the gospel there is no forgiveness of sin, but for this purpose the Lord Jesus came into the world to bear away the curse of sin. On the cross at Calvary the Lord suffered the judgement of God for sin. The sins of lies, cheating, murder and stealing, as well as millions more, were laid on Jesus, so that He was our sin bearer.
The Bible promises, “If we confess our sins, he is faithful and just to forgive us our sins, and to cleanse us from all unrighteousness” (1John 1:9). That is the only way for you to be free from the torment of your sin.

A woman came to a minister, carrying in her hands a quantity of wet sand, “Do you see what this is, sir?” she said. “yes, It is wet sand,”
“But do you know what it means?”
“I do not know exactly what you mean by it. What is it?”
“Ah, sir!” she said, “that’s me, and the multitude of my sins can’t be numbered;” and she gave way to passionate weeping. The minister, calming her, asked her where she had procured the sand.
“At the Beacon.”
“Go back, then, and take a spade with you and dig till you raise a good mound, shovel it as high as ever you can, and leave it. Stand back on the shore and see the effect of the waves upon it.”
The meaning came to the woman. The blood of Christ would wash all her sins away.
You don’t need to live tormented by yours sins. The Lord Jesus is our sin bearer. The moment you cast your sins on Jesus by confessing them to Him, you are set free from all guilt. You are justified in God’s sight, which means that you appear to God just as if you had never sinned. Pray to the Lord Jesus today to save you from your sins, and He will.

To listen to this story on audio click here.