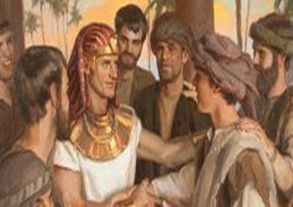 Think of the hymn, written by John Newton:
Amazing grace how sweet the sound that saved a wretch like me.
I once was lost but now I’m found, Was blind but now I see.

That's the testimony of each Christian. If you are saved from your spiritual blindness, you will agree that sin blinds, but Jesus truly opened your heart to know Him and to love Him. Now you live to praise Him for His amazing grace that has saved you.