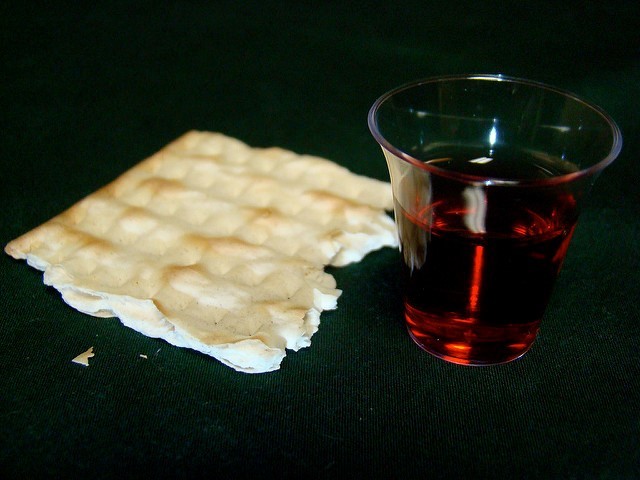 In What sense is Christ present in the Lord’s supper?
By taking the word “is” in the institution of the Lord’s Supper as emphatic, the Roman Catholic Church gives it the sense of transubstantiation, that in communion (the mass) it is changed into the literal body and blood of the Lord Jesus. They, therefore, proceed to worship the host, or the wafer as the very person of Christ.
The Lutherans gave the Lord’s Supper the sense of consubstantiation, that the presence of Christ is in, under and around the elements. Some later Lutherans prefer not to call this the literal bodily presence.

Zwingli, the Swiss protestant reformer, reduced the Lord’s Supper to a commemorative act, though he did not deny that Christ was spiritually present to the faith of believers. Zwingli, emphasized the Lord’s table as man’s way to consider the gospel of Christ, but did not emphasize it as God’s means of ministering grace to His people.

The Reformed churches, including John Calvin in Geneva, understood the words of the Lord to be meraphorical: “This is (that is, signifies) my body.” The same was applied to the Lord’s statements in John 6:35; 15:1. Major emphasis was laid on the words, “which is given you” (Luke 22:19). This is understood to mean, “given for the benefit, or in the interest, of the disciples, and intended for all believers.

In the Lord’s Supper Christ is not present bodily. For the Lord’s body to be present at each communion table on the Lord’s day when communion is held by multiplied congregations would require omnipresence. Christ’s body is in heaven. His physical body is not omnipresent. Before the Lord departed from His disciples, He gave them the promise of the Holy Spirit, through whom He would be spiritually present among His people in the world.

Christ is present, therefore, spiritually as a fountain of spiritual virtue and grace to believers. Christ ordained this ordinance with these two visible signs to be a means of dispensing grace to the hearts of His people through their faith in the word with its promises while attending the communion table.
The emphasis is upon God’s plan to pour in grace to our hearts, as it is much more than a means of remembering the historical facts and interpretation of the Saviour’s death.

The ordinance of the communion contains a pledge or guarantee that God will be present by His Spirit to actively minister grace to His people [W.C.F. Ch. 29.1] John Calvin stressed that it is first, a gracious gift of God to believers, and second, a commemorative means for believers to remember the death of Christ as a sacrifice for our sin.

That the Lord instituted the communion table to be a means of grace to minister grace to believer’s hearts is seen in the following ways:

1. By its name—the Lord’s Supper. It is intended to nourish our souls, just as bread and wine are food and drink for the body. This fact, linked with the perpetuity of it and the frequency by which believers are to receive communion, declares that it is to nourish our souls.

2. By the Lord blessing the bread (Matt. 26:26-27). He did not change its substance or nature. The blessing was to set it apart from a profane to a holy purpose, to feed souls in a spiritual manner.

3. By the Lord giving thanks for the bread and the wine (Matt. 26:26 –27), which speaks of the blessings to be received through them.

4. By the Lord’s supper being administered along with the word. It is a word-based-sign ordinance. The preaching is to bring participants to understand Christ’s redeeming work in His death, and minister to the faith of participants. As outward signs and symbols, they point believers to their Redeemer and His work, not some mysterious power within the wine and bread. As signs and symbols of Christ’s sacrifice, the administration of the wine and the bread is always to be accompanied by the preached word to stir up faith in Christ’s redeeming work, thus leading communicants to trust with a hearty reliance all the more on the blood and righteousness of Christ.

5. By the change from the Passover lamb to the use of bread. All blood offerings in the O.T. were symbolic of Christ and His death.
The blood of the Passover lamb had no value in itself, but its use instructed God’s people to look to Christ as the forthcoming Lamb of God.

The Passover lamb symbolized Christ, but when Christ was slain for sin, that symbol was fulfilled and no longer required. So, in the institution of the Lord’s supper it was fitting that bread be used as the symbol of nourishment.