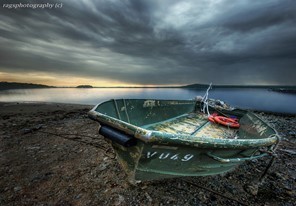 Summer is the time to go boating. Boats are a marvellous way to travel up rivers, across lakes and over seas. Boats come in all sizes, from one-person canoes to container ships that look like metal mountains floating over the high seas of the world. All boats do better when the water stays calm and the wind remains a light breeze. But when the wind blows fiercely, as it often does on lakes and wide-open oceans, it can stir up the water into raging, angry waves that toss even the largest ships like helpless match boxes.

The sea of Galilee, which was really a small lake, was very risky for boaters. Sudden winds often blew down over the lake from the hillsides around it. Fishermen dared not to be caught off guard. At the first sign of dark clouds or howling winds fishermen would row their boats to the safety of the shore to tie them up.

The Bible records in Matthew chapter 8 that while out on the lake in a boat the disciples got caught in a terrible and sudden storm. The winds were so strong that the water splashed over the sides of their little boat. High waves sent water pouring into the boat, filling it up, and weighing it down until the disciples panicked with fear. Most likely in the past they had seen other boats sink to the bottom of the lake carrying everything and every body down with it. It would take a strong swimmer to make it to shore without a boat in a storm. You might think you can swim well, but in a storm of raging water you may not be able to swim at all, nor stay afloat. The disciples, therefore, were truly fearful of their lives.

All the while, the Lord Jesus was with them but when the storm arose He was sound asleep in the back of the boat. He never stirred while the boat was being rocked back and forth and was lifted up by the high waves and down again into the deep water. So, the disciples awoke the Lord from His sleep. They cried aloud to him to do something to save the boat and to save them from perishing in the depths of the rough, cold water.

Before the Lord did anything he asked the disciples, “Why are ye fearful, O ye of little faith?” This, then, was a test of the disciples’ trust in the help and power of the Lord to keep them alive. He probably would have preferred, that instead of panicking and worrying themselves so greatly, that they had gone to him earlier, for they tried to steer the ship to land by their own skills to keep the boat from sinking. That was not an act of faith in the Lord, but of self-dependence. They had wanted to survive the storm by themselves.

That is always a problem for people, even those who know they need to be saved from their own sin. People want to do all they can to help themselves do better and prove that they can keep themselves from the power of sin and the devil. So, they leave the Lord out of their lives and try to do it all by themselves, but they can’t do it. They find themselves battling against sin, temptation and the devil until they are in danger of perishing. That is to live in doubt and unbelief. That is to refuse to go to the Lord for help.
Faith would say, stop trying to save yourself. Faith would say, you cannot do this alone, you need the Lord Jesus to be your Saviour to keep you from perishing. It is very sad to observe people do this every day. They admit that they live in danger of sinning and fall to many temptations. They repeatedly try to resist and get over danger, but they cannot. All because they are trying to do it alone, with the Lord as their Saviour

Immediately after the disciples called on the Lord, He arose from the back of the boat, stood facing the wind and the waves to see their forces at work tossing the boat in the rough threatening waters. Then the Lord opened his mouth and shouted for the wind to stop. He forbad it to blow any more. Then the Lord spoke also to the waves telling them to stop their raging and calm down. The Bible says, “and there was a great calm.”  Just like that, in a split second the storm was all over and the boat rested on the water that turned as smooth as glass. The wind was totally gone. It was a great calm, meaning that it was dramatically different from the storm. From the sudden reversal of the storm into a calm it was obvious that a miracle had taken place, for normally it would take a long time, even hours, for the wind and water to become still.

The Lord had commanded the wind and the waves to be still. The bible says that the Lord “rebuked the winds and the sea.” He forbad them to blow and storm anymore, and they obeyed Him.

The answer to that question is really the story of Jesus’ whole life. He was no ordinary man. He was not limited by the created forces of the world around Him. He was the Creator of the world, who had spoken the world into existence. All creation obeys Him. Every situation is totally under His control. The Lord Jesus is God in human form. This miracle introduced the disciples to the true nature of the Lord Jesus. They had to learn that He is all powerful and able to answer their problems immediately.
The disciples learned that it is right for us to go to the Lord in every situation that troubles us, for the Lord has the power to help.

The Lord Jesus can help us with our daily needs and daily tasks. He can deliver us from every trial and temptation, even when the devil attacks us, or when we cannot cope with the cares of life. Best of all, this miracle demonstrates that the Lord truly cares for us. But He wants us to call on Him for His help. If we try to do it alone, we fail to honour Him.

That is also true when we ask for salvation. By calling on the Lord to save our souls from sin and hell, we act in faith, and we honour the Lord, because as we have just seen He delights to save the perishing. He will likewise save you by His mighty power. Then you will know that “Salvation is of the Lord.”