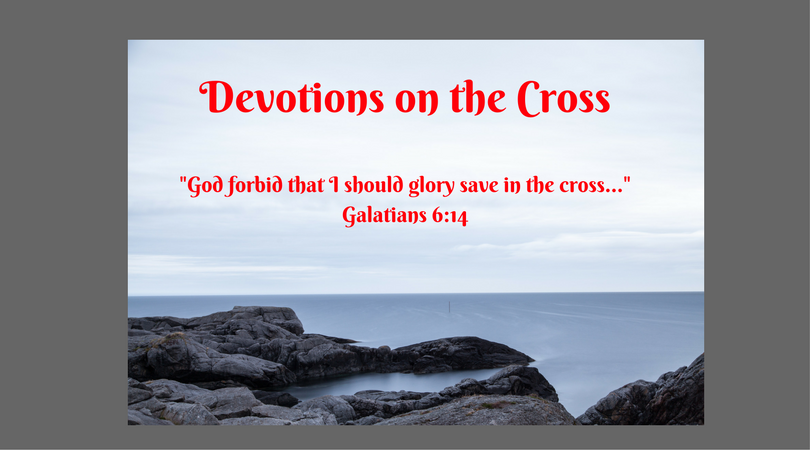 "And he bearing his cross went forth into a place called the place of a skull, which is called in the Hebrew Golgotha: Where they crucified him, and two other with him, on either side one, and Jesus in the midst. And Pilate wrote a title, and put it on the cross. And the writing was, JESUS OF NAZARETH THE KING OF THE JEWS. This title then read many of the Jews: for the place where Jesus was crucified was nigh to the city: and it was written in Hebrew, and Greek, and Latin. Then said the chief priests of the Jews to Pilate, Write not, The King of the Jews; but that he said, I am King of the Jews. Pilate answered, What I have written I have written (John 19:17-22).

On that day of all days, the cross became a poster board. In the wonderful providence of God, the truth about Christ's person came out from the decree of a Gentile Roman-appointed governor, Pilate. In three languages the proclamation was made in writing, right on the cross, where the many were gazing upon the suffering Saviour. In large letters the title stated, JESUS OF NAZARETH THE KING OF THE JEWS. And from that act of nailing a sign to the cross, the truth still ripples and circles the world. Jesus of Nazareth is the King of the Jews.
As often stated, facts are stubborn things. Even Pilate refused to reword the sign, when he said, "What I have written I have written."  The sign would remain, Pilate would be pushed no further as his conscience was already reeling from the treachery of assisting the Jews to crucify their own King.
John Calvin observed that Pilate, by publishing in three languages Christ's title was " by a secret guidance made a herald of the gospel."
Dr. J. C. Ryle, the first Bishop of Liverpool, explained this event succinctly by writing,
"The title placed over our Lord's head made this plain and unmistakable.  The reader of Greek, or Latin, or Hebrew, could not fail to see that He who hung on the central cross of the three on Golgotha, had a royal title over his head. The overruling hand of God so ordered matters, that the strong will of Pilate overrode for once the wishes of the malicious Jews. In spite of the chief priests our Lord was crucified as "the King of the Jews."
It was meet and right that it so it should be, continued Dr. Ryle. "Even before the Lord was born, the angel Gabriel declared to the Virgin Mary, "The Lord God shall give unto Him the throne of His father David; and He shall reign over the house of Jacob forever; and of His kingdom there shall be no end" (Luke 1:23-33).  Almost as soon as he was born, there came wise men from the East, saying, "where is he that is born King of the Jews?" Matt 2:2. The very week before the crucifixion, the multitude who accompanied our Lord at His triumphal entry into Jerusalem had cried, "Blessed is the King of Israel that cometh in the name of the Lord" (John 12:13).
So then this inscription written in Hebrew, Latin and Greek - spoke volumes to the gazing crowds and testified loud and clear that this suffering Jesus on the cross was not only a king, or a king of the Jews, but the King of glory. Deity was designated in that inscription. This is the One who would fulfil all those OT scriptures and this is He who would die in the place of sinners to be crowned as their King.
As such He lived. As such He died, and as King, He shall come again.
Dr. Ryle rightly appealed to his readers, as I do to you also, "Let us take care that we ourselves know Christ as our King and that His kingdom is set up within our hearts. They only will find Him their Saviour at the last day, who have obeyed Him as King in this world."
The kingdoms of this world, as Daniel foretold, shall be swept aside, and become the kingdom of our God and of His Christ.  And at last every knee shall bow to Him, and every tongue confess that Jesus Christ is Lord."
Will you be among them who honour Christ as your King? More importantly and more pressing to the need of your soul, is He your King today?
Tweet