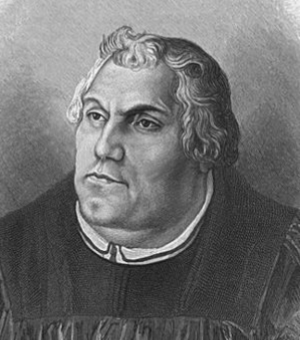 It is a wonderfully strange thing that the man who was driven to the monastery by the fear of God, became the liberator of multitudes of monks to truly worship God.

"In July 1505  the young Martin Luther was trudging along a country road  near the village of Stotternheim, when he was caught in a thunderstorm.  A bolt of lightening knocked him to the ground. When he arose he vowed in terror, "St. Anne Help me! I will become a monk."1

In the providence of God, the man, who would become the Protestant Reformer, had to enter the monastery and personally suffer its shame as well as its powerlessness to grant peace to troubled hearts. Most monks were blind to their own sin and to the folly of the system banning men from the light of day to languor in further darkness.

In his Table Talk, Luther stated,

"In Italy the monasteries are very wealthy. There are about three or four monks to each; the surplus of their revenues goes to the pope and his cardinals."

The wealth of monasteries were always at the expense of the poor people in their localities. The monks begged and expected to be provided for without any labour toward the people. The greed of monks knew no bounds in medieval Europe, and we fear it hasn't changed in more modern times.

Again in his Table Talk, Luther gave an instance of such greed:

"A gentleman being at the point of death, a monk from the next convent came to see what he could pick up, and said to the gentleman: Sir, will you give so and so to our monastery? The dying man, unable to speak, replied by a nod of the head, whereupon the monk, turning to the gentleman's son, said; You see, your father makes us this bequest.

The son said to the father:

Sir, is it your pleasure that I kick this monk down the stairs?  The dying man nodded as before, and the son forthwith drove the monk out of doors."

In pre-reformation times the countries of Europe were filled with monasteries with droves of monks infesting the land. They claimed vast estates which contributed nothing to the treasury of their respective countries, but they either ate the gain themselves or forwarded their excess gain to the pope of Rome. When Henry VIII broke with Rome, he had his ministers ban monasteries and empty them.

Why become a monk?

"The man who was later to revolt against monasticism became a monk for exactly the same reason as thousands of others, namely, in order to save his soul. The immediate occasion of his resolve to enter the cloister was the unexpected encounter with death on that sultry July day in 1505.  He was then twenty one and a student at the University of Erfurt. As he returned to school after a visit with his parents, a bolt of lightning struck him to the earth. In that single flash, he saw the denouement of the drama of existence. There was God, the all-terrible, Christ the inexorable, and all the leering fiends springing from their lurking places in pond and wood that with sardonic cachinnations they might seize his shock of curly hair and bolt him into hell. It was no wonder that he cried out to his father's saint, patroness of mines, "St. Anne help me! I will become a monk."2