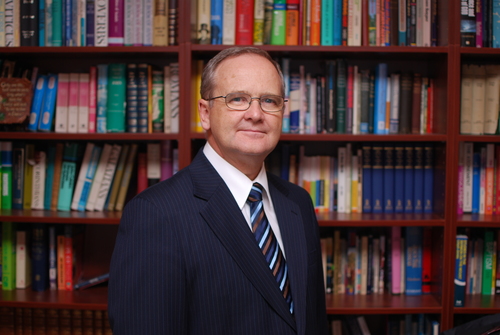 Pastor Ian Goligher preaches at each of the church services and presents the Let the Bible Speak radio programs. His wife, Beulah, is the church organist.

He was converted to Christ at age 18, and heard God's call to the gospel ministry at age twenty. He received his theological training at The Whitefield College of the Bible in Northern Ireland. As a student minister he cared for a fledgling FPC congregation in Kesh, Co. Fermanagh, and on October 22, 1981, was ordained by the Presbytery of The Free Presbyterian Church of Ulster as the minister of Garvagh FPC in Co. Londonderry.

During a visit to Canada in 1982, he was exercised about the vast need for gospel preaching in Canada. Ater waiting on the Lord, Pastor Goligher became convinced of God's call to the Vancouver area and arrived here with his wife, Beulah, and their two oldest children, on July 6, 1984. They now have five grown children and nine grandchildren.

Pastor Goligher is a family man, a gardener and a lover of Christian biography. He asks God's people to pray for him that he may fulfil the gospel ministry which the Lord has given him in the church, on radio and as editor of Current, the quarterly magazine of the Free Presbyterian Church of North America.